Our high school was officially announced and opened on the Feast of the Immaculate Conception, December 8, 2005 by Bishop Edmond Carmody in the Immaculate Conception Chapel on campus.  The inaugural year began on August 1, 2006, with a class of freshmen.  Each year a new grade level was added until we had a four-year high school, grades nine through twelve. The creation of St. John Paul II High School was the vision and inspiration of Bishop Edmond Carmody, who desired to create a Catholic School that was accessible, affordable, and available to all students seeking a Catholic education.  As a Catholic school, we provide a unique environment in which students can experience the presence of the Holy Spirit.  Its focus is on the individual person's spiritual, moral, intellectual, social, cultural and physical development. 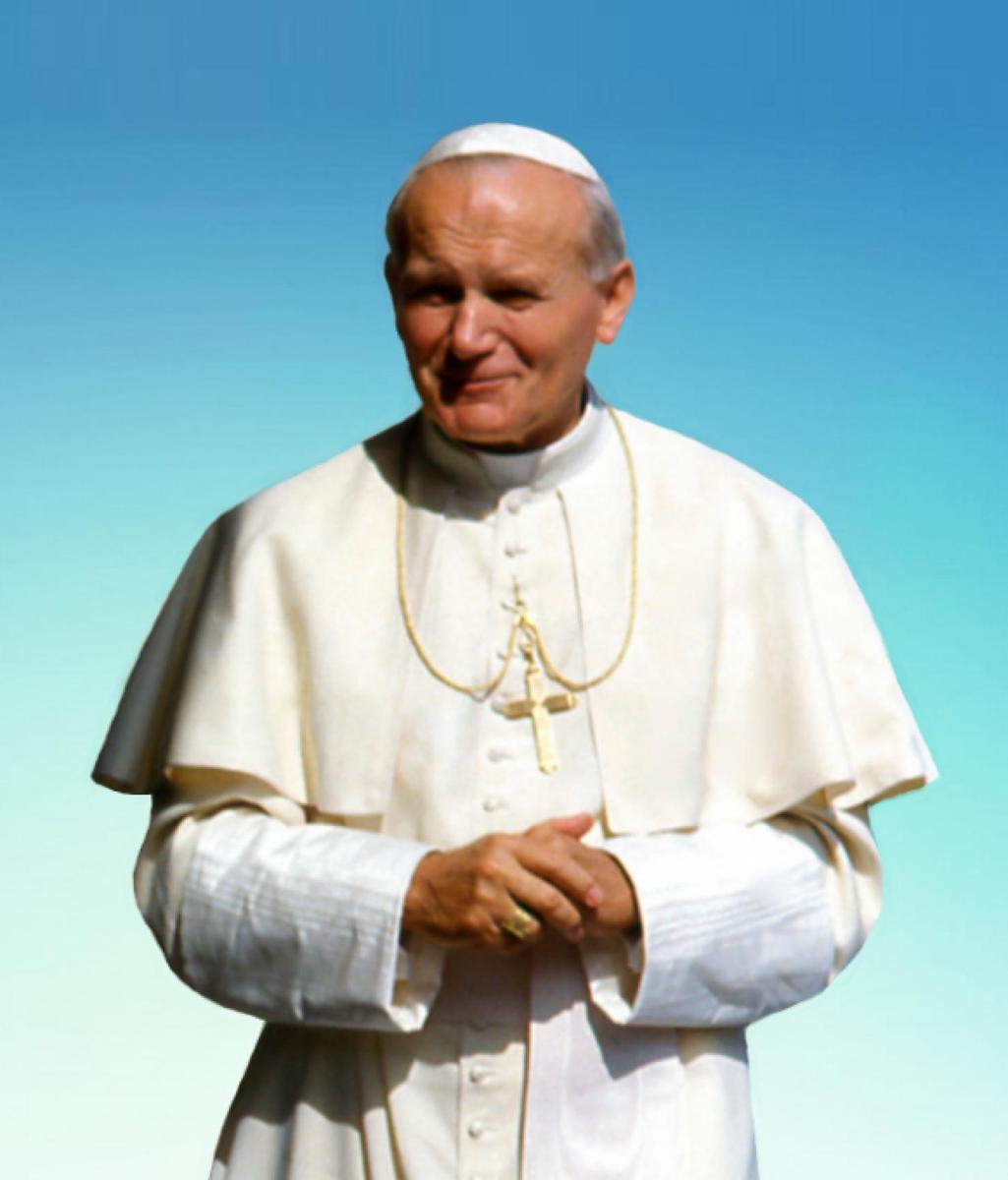 The patron saint of our school is St. John Paul II.  Through his courage, intellect, and faithfulness, St. John Paul II had a great impact on both the Church and the world.  He played an integral role in the collapse of communism.  He defended life at all stages and advocated for people who were poor and marginalized.

We celebrate the Feast Day of St. John Paul II on October 22nd, the anniversary of his papal inauguration.

In the upper left quadrant is a green field which stands for Bishop Carmody’s birthplace, Ireland, but also the color of hope.  On this field is blazoned the two crossed keys found on the flag of the Vatican City State symbolizing the keys of St. Peter and representing the schools’ fidelity to the Roman Catholic Church and its love for the Pope. The gold cross in the middle is taken from Pope St. John Paul II’s shield and Bishop Carmody’s shield.

In the upper right quadrant is a blue field blazoned by a silver star which is also taken from Bishop Carmody’s coat of arms and denotes the State of Texas, the site of the Bishop’s priestly and episcopal ministry.  The star can also be found behind the head of St. Mary in the Immaculate Conception Chapel, an homage to the state by the artist Antonio Garcia, along with a crown of 12 smaller stars referenced in Revelation 12: 1-2, representing the apostles and tribes of Israel.

In the lower right quadrant is a blue field blazoned by a large “M” for Maria, which is taken from the coat of arms of St. John Paul II, which was dedicated to the Blessed Virgin Mary.  St. John Paul II took as his episcopal motto “Totus tuus”, which is from the prayer of St. Louis Marie de Montfort who wrote “Totus tuus ego sum et omnia mea tua sunt”, which means I am totally yours and all that I have is yours.  The “M” also denotes the schools’ dedication to the Mother of God and its chapel under the patronage of the Immaculate Conception.

The motto of our school is “Be Not Afraid!”, which was the signature phrase of St. John Paul II, and exemplified his leadership of the Catholic Church.  The phrase was first uttered by the saint on October 22, 1978, in St. Peter’s Square in his first address as Pontiff. 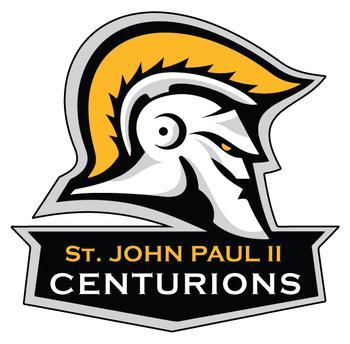 St. John Paul II High School has taken as its mascot the Centurion, who was a roman officer commanding a century or a company, the strength of which varied between fifty to one hundred men.   The Centurion was the most important and most respected officer in the Roman Army.   He was a leader who rose from the common ranks to high authority due to his intellect and virtue.  In Scripture we find another attribute of Centurions…faith.
In the New Testament the Centurion is mentioned 7 times.  In all these Centurions their faith is to be admired.  One came to seek the aid of Christ for his servant, and uttered the remarkable words of humility that we hear echoed at every Mass, "Lord, I am not worthy to have you enter under my roof; only say the word and my servant will be healed" (Mt 8:8); and Jesus tells him "Amen, I say to you, in no one in Israel have I found such faith" (Mt 8:10).  Another Centurion having witnessed the crucifixion of Jesus stated "Truly this man was the Son of God" (Mk 15:39).
The Centurions in the Holy Scripture represent faith, reason and virtue, in addition to strength, dignity, honor, and humility.   In preparing our students for this life and the next, we desire for them to achieve worldly authority like the Centurion officers, but also like the Centurions in the New Testament, to always recognize a higher authority in Jesus Christ.   For this reason, we find the Centurion a worthy symbol and model for holiness and excellence.

The school colors are black and gold.  The black color signifies our connection to the diocesan priesthood, that predominantly wears black.  The gold signifies the value of the laity, and their importance in building the Kingdom of God.  The colors together signify the unity of the clergy and the laity, which is necessary in living out the charisms of faith, reason and virtue.

Most Loving Father,
You brought St. John Paul II High School into existence with the purpose of forming young men and women through faith, reason and virtue in the person of Jesus Christ, and thereby becoming the best version of themselves.

Following the example and teachings of our late beloved Holy Father, St. John Paul II, and through the intercession of St. Mary our mother, may we be empowered with Your Holy Spirit to labor tirelessly in forming a generation of servant leaders.

Servant leaders who will do their part in building a new civilization, one marked by genuine love of family, and for every person, especially the weakest and most vulnerable.

We ask this in the name of Your Son Jesus, for He is our Lord and the model of everything that we desire to be.  Amen.

St. John Paul II…Pray for us.

St. John Paul the Second High School
Black and Gold stand strong
Your halls call our hearts to God
To Him do we belong. With Christ as our strength
We Know dishonor we’ll evade
For Faith, Reason, Virtue tell us to
BE NOT AFRAID!
Click here to learn more about our Founding Bishop, Bishop Edmond Carmody 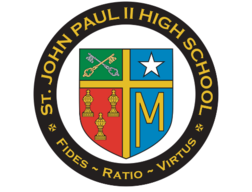